Gourmet getaways in Costa Rica? They aren’t just for guests!

Ask any of our guests and they’ll tell you, food is a memorable part of the Cayuga experience. Whichever hotel you visit you’ll find menus packing tasty local ingredients and fusion flavors, putting a most delicious spin on our region’s favorite dishes. And behind those menus are our talented chefs, always keen to experiment and explore their art from a different angle.

This weekend we brought many of those chefs together from all corners of Costa Rica and even Nicaragua and Panama for the annual Chef’s Workshop at Arenas Del Mar, organized by Cayuga’s Food & Beverage Director, Yovanka Guerra. It’s not unusual for large hospitality chains to have these kinds of gatherings, but for our locally-recruited chefs, they’re a real highlight – a golden opportunity to pool their ideas, share their creations and of course bond with fellow chefs from the three countries where the Cayuga Collection operates.

Costa Rican chef Pablo Bonilla who specializes in ancestral gastronomy taught us about a variety of corn that is almost extinct and took us on a food foraging walk through the rainforest that surrounds Arenas Del Mar. Along the way we picked wild mushrooms, the aromatic heart-shaped hoja santa herb, and bijagua leaves that we later used in food preparation.

Chef Pablo’s focus was on the concept of “rescue”. The idea of his workshop was to encourage chefs to turn back to ancestral gastronomy for inspiration and to rescue forgotten local ingredients, traditions and techniques from indigenous tribes that have inhabited this part of the world for thousands of years.

Chef Kuntal Kumar of the newest Cayuga Collection property, Kinkara Luxury Retreat near Mount Chirripo in Costa Rica’s southern zone, shared his knowledge on working with guests that are vegetarian, vegan, gluten-free or have other dietary restrictions and allergies.

This is becoming a more and more relevant topic and we’re proud that many of our hotels are whole-heartedly embracing the challenges of diversifying their culinary offerings. Arenas Del Mar in Manuel Antonio has become one of the world leaders in gourmet gluten free dining, while Kinkara is pushing the boundaries of plant-based earth-to-plate cuisine, using its kitchens, farms and food forest as a platform for culinary innovation.

Sous Vide and the Plastic Conundrum

Another cooking technique that has gained more and more presence in our kitchens is sous vide, which means “under vacuum” in French. It refers to the process of vacuum-sealing food in a bag then cooking it at a precise temperature in a water bath.

While preparing food sous vide might make for a tasty meal, it implies the use of more plastic in the kitchen, and that’s something we are working to minimize. Banishing single-use plastics from the kitchen is still a major challenge and one that we’re all putting our heads together to solve.

Of course, no culinary meet would be complete without a beverage workshop so we invited the owners of our two main wine suppliers to join us for a session on how to pair the organic and biodynamic Latin American wines we serve. Mathilde Moreau of French Paradox and Conrad Haehner of Sabores Argentinos were kind enough to travel to Manuel Antonio on Sunday to share their invaluable knowledge with our chefs who were eager to learn as they sipped.

At one stage, the workshop also took on the air of a Food Channel TV competition when we divided the chefs into two groups and asked them to create a three-course meal for the guests of Arenas Del Mar based entirely on plants and no other protein than eggs. The teams received a set of ingredients and were asked to put on their creative hats in an exercise designed to get them thinking about reducing the amount of meat they serve due to its role in climate change.

After two full days of learning, experiencing, connecting and some much needed relaxing, our chefs headed back to Nosara, Monteverde, Perez Zeledon, Uvita, Santa Teresa, Panama and Nicaragua to put into practice what they learned over the weekend in Manuel Antonio. We’ll be seeing many of them again next month in San Jose for Cayuga Week, where we bring over 100 team members of all different departments across the Cayuga hotels to Costa Rica’s capital for two days of sharing and inspiring. 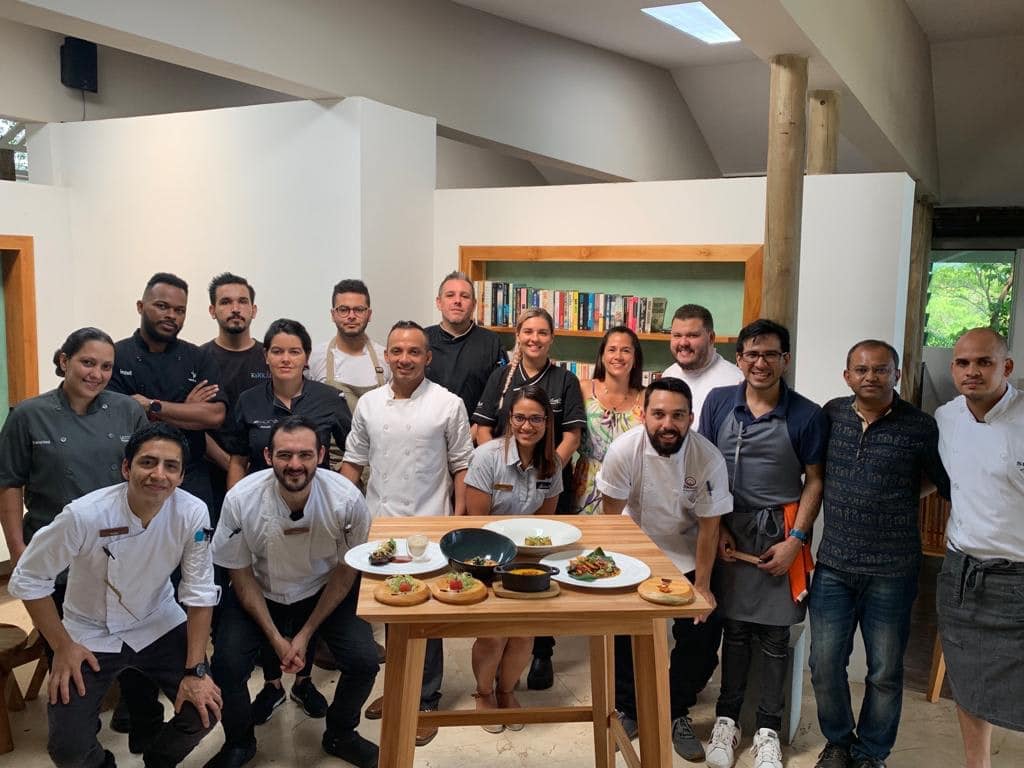 Participants of the Chef Event in Arenas del Mar 2019: